Is Your Light Shining Brightly? 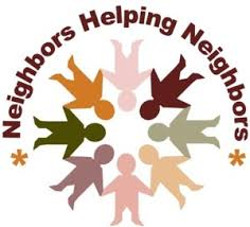 Confronting the needs of others brings out various attitudes in us. Jesus used the story of the good but despised Samaritan to make clear what attitude was acceptable to Him.

JESUS AND THE PARABLE OF THE GOOD SAMARITAN

28 “You have answered correctly,” Jesus replied. “Do this and you will live.” 29 But he wanted to justify himself, so he asked Jesus, “And who is my neighbor?” 30 In reply Jesus said: “A man was going down from Jerusalem to Jericho, when he was attacked by robbers. They stripped him of his clothes, beat him and went away, leaving him half dead.

31 A priest happened to be going down the same road, and when he saw the man, he passed by on the other side. 32 So too, a Levite, when he came to the place and saw him, passed by on the other side. 33 But a Samaritan, as he traveled, came where the man was; and when he saw him, he took pity on him. 34 He went to him and bandaged his wounds, pouring on oil and wine. Then he put the man on his own donkey, brought him to an inn and took care of him. 35 The next day he took out two denarii and gave them to the innkeeper. ‘Look after him,’ he said, ‘and when I return, I will reimburse you for any extra expense you may have.’”

If we are honest, we often will find ourselves in the place of the expert in the law, needing to learn again who our neighbor is. Note these 5 different attitudes toward the wounded man.

IS YOUR LIGHT SHINING BRIGHTLY?

Matthew 5:14-16 (NIV) says “You are the light of the world. A town built on a hill cannot be hidden. Neither do people light a lamp and put it under a bowl. Instead they put it on its stand, and it gives light to everyone in the house. In the same way, let your light shine before others, that they may see your good deeds and glorify your Father in heaven.”

Think About The Following: You go into a public restroom. There, you see a person who has passed out on the restroom floor. And, that person’s skin color or nationality is different than yours. What would you do? Would you be like the priest and the Levite or would you be the Good Samaritan?

Philippians 2:5 (NLT) says “You must have the same attitude that Christ Jesus had.”

Always Leave Your Light On And Let It Shine Brightly!

Use God’s Armor To Resist Attacks. 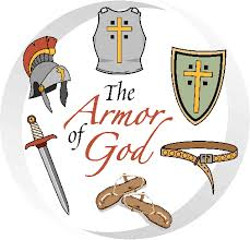 We are engaged in a spiritual battle. All believers find themselves subject to Satan’s attacks because they are no longer on Satan’s side. For this reason, the Bible tells us to use every piece of God’s armor to resist Satan’s attacks and to stand true to God in the midst of those attacks.

Listed below are the six pieces of God’s armor and their individual application. (For Scripture References, see Ephesians 6:10-17.)

Application: Satan fights with lies, and sometimes his lies sound like the truth; but only believers have God’s truth, which can defeat Satan’s lies.

Application: Satan often attacks our hearts...the seat of our emotions, self-worth and trust. God’s righteousness is the breastplate that protects our hearts and ensures His approval. God approves of us because He loves us and sent His Son to die for us.

Application: Satan wants us to think that telling others the Good News is a worthless and hopeless task...the size of the task is too big and the negative responses are too much to handle. But the foot gear God give us is the motivation to continue to proclaim the true peace that is available in God...news everyone needs to hear.

Application: What we see are Satan’s attacks in the form of insults, setbacks and temptations. But the Shield of Faith protects us from Satan’s flaming arrows. With God’s perspective, we can see beyond our circumstances and know that the ultimate victory is ours.

Application: Satan wants to make us doubt God, Jesus and our salvation. The helmet protects our minds from doubting God’s saving work for us.

6. SWORD OF THE SPIRIT

Application: The sword is the only weapon of offense in this list of God’s armor. There are times when we need to take the offensive against Satan. When we are tempted, we need to trust in the truth of God’s Word.

ALWAYS WEAR ALL YOUR ARMOR

In the Christian life, we battle against rulers and authorities (the powerful and evil forces of fallen angels headed by Satan, who is a vicious fighter.) And, they will try to use every device they have to turn us away from God and back to sin. To withstand their attacks, we must depend on God’s strength and use every piece of His armor.

Although we are assured of victory, we must engage in the struggle until Christ returns, because Satan is constantly battling against all who are on the Lord’s side.

We need supernatural power to defeat Satan, and God has provided this by giving us His Holy Spirit within us and His armor surrounding us.

As you do battle against the powers of this dark world, always wear all your armor and fight with the strength that is available to you through the Holy Spirit.

Salvation By Faith In Jesus Christ. 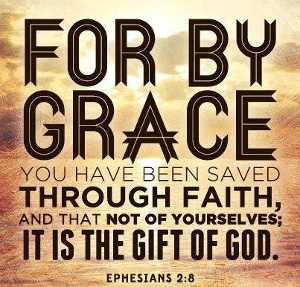 Salvation by faith in Jesus Christ sounds too easy for many people. They would rather think that they must do something to save themselves. Through this kind of thinking, their religion becomes one of self-effort that leads either to disappointment or pride, but finally to eternal death.

1. Goal: Please God by our own good deeds.

2. How: Practice, diligent service, discipline, and obedience, in hope of rewards.

1. Goal: Trust in Christ and then live to please God.

2. How: Confess, submit, and commit yourself to Christ’s control.

3. Power: The Holy Spirit in us helps us do good work for Christ’s kingdom.

The simple plan of Salvation by faith in Jesus Christ is the only way, and it alone leads to eternal life.

WHAT MUST YOU DO TO BE SAVED?

Romans 10:8-13 (NIV) says “But what does it say? ‘The word is near you; it is in your mouth and in your heart,’ that is, the message concerning faith that we proclaim: If you declare with your mouth, ‘Jesus is Lord’ and believe in your heart that God raised him from the dead, you will be saved. For it is with your heart that you believe and are justified, and it is with your mouth that you profess your faith and are saved. As Scripture says, ‘Anyone who believes in Him will never be put to shame.’ For there is no difference between Jew and Gentile—the same Lord is Lord of all and richly blesses all who call on Him, for, ‘Everyone who calls on the name of the Lord will be saved.’” 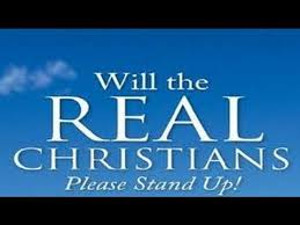 Almost from the beginning there were forces at work within Christianity that could have destroyed or sidetracked the movement. Of these, three created many problems then and have continued to reappear in other forms even today.

These three Distortions Of Christianity are contrasted in this post to True Christianity.

1. Their Definition Of Christianity: Christians are Jews who have recognized Jesus as the promised Savior. Therefore, any Gentile desiring to become a Christian must first become a Jew.

2. Their Genuine Concern: Having a high regard for the Scriptures and God’s choice of Jews as His people, they did not want to see God’ s commands overlooked or broken.

3. The Danger: Tends to add human traditions and standards to God’s law. Also subtracts from the Scriptures God’s clear concern for all nations.

4. Application Question: Do you appreciate God’s choice of a unique people through whom He offered forgiveness and eternal life to all peoples?

1. Their Definition Of Christianity: Christians are those who live by a long list of “Don’ts”. God’s favor is earned by good works and good behavior.

2. Their Genuine Concern: Recognized that real change brought about by God should lead to changes in behavior.

3. The Danger: Tends to make God’s love something to earn rather than to accept freely. Would reduce Christianity to a set of impossible rules and transform the Good News into bad news.

4. Application Question: As important as change in action is, can you see that God may be desiring different changes in you than in others?

1. Their Definition Of Christianity: Christians live above the law. They need no guidelines. God’s Word is not as important as our personal sense of God’s guidance.

2. Their Genuine Concern: Recognized that forgiveness from God cannot be based on our ability to live up to His perfect standards. It must be received by faith as a gift made possible by Christ’s death on the cross.

3. The Danger: Forgets that Christians are still human and fail consistently when trying to live by what they “feel” God wants.

4. Application Question: Do you recognize the ongoing need for God’s expressed commands as you live out your gratitude for His great salvation?

1. Their Definition Of Christianity: Christians are those who believe inwardly and outwardly that Jesus’ death has allowed God to offer them forgiveness and eternal life as a free gift. They have accepted that gift through faith and are seeking to live a life of obedient gratitude for what God has done for them.

2. Their Genuine Concern: Christianity is both private and public, with heart-belief and mouth confession. Our relationship to God and the power He provides result in obedience. Having received the gift of forgiveness and eternal life, we are now daily challenged to live that life with His help.

3. The Danger: Avoid the above dangers.

4. Application Question: How would those closest to you describe your Christianity? Do they think you live so that God will accept you or do they know that you live because God has accepted you in Christ? If you were on trial for being a Christian, would there be enough evidence in your life to convict you?

WHAT MUST YOU DO TO BE SAVED?