Are You Ready For The Rapture? 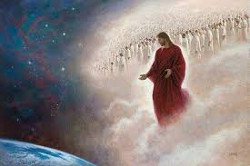 Jesus is coming back soon to gather up all His children in what is known as the “Rapture”. Are you ready for His return?

Matthew 24:27 (NIV) says “For as lightning that comes from the east is visible even in the west, so will be the coming of the Son of Man.”

Matthew 24:30-31 (NIV) says “Then will appear the sign of the Son of Man in heaven. And then all the peoples of the earth will mourn when they see the Son of Man coming on the clouds of heaven, with power and great glory. And He will send His angels with a loud trumpet call, and they will gather His elect from the four winds, from one end of the heavens to the other.”

1 Thessalonians 4:16-17 (NIV) says “For the Lord himself will come down from heaven, with a loud command, with the voice of the archangel and with the trumpet call of God, and the dead in Christ will rise first. After that, we who are still alive and are left will be caught up together with them in the clouds to meet the Lord in the air. And so we will be with the Lord forever.”

Note: Please keep in mind that the above scriptures only apply to those who have accepted Jesus as their Savior and made Him Lord of their life.

It has been prophesied that only 10% of “Born Again” Christians are ready for Jesus' return. Jesus used the following parable to explain what it meant to be ready for His return.

THE PARABLE OF THE TEN VIRGINS

Matthew 25:1-13 (NIV) says “At that time the kingdom of heaven will be like ten virgins who took their lamps and went out to meet the bridegroom. Five of them were foolish and five were wise. The foolish ones took their lamps but did not take any oil with them. The wise ones, however, took oil in jars along with their lamps.

The bridegroom was a long time in coming, and they all became drowsy and fell asleep. At midnight the cry rang out: ‘Here’s the bridegroom! Come out to meet him!’ Then all the virgins woke up and trimmed their lamps.

The foolish ones said to the wise, ‘Give us some of your oil; our lamps are going out.’ ‘No,’ they replied, ‘there may not be enough for both us and you. Instead, go to those who sell oil and buy some for yourselves.’

But while they were on their way to buy the oil, the bridegroom arrived. The virgins who were ready went in with him to the wedding banquet. And the door was shut.

Later the others also came. ‘Lord, Lord,’ they said, ‘open the door for us!’ But he replied, ‘Truly I tell you, I don’t know you.’ Therefore keep watch, because you do not know the day or the hour.” End Of Parable.

This parable is about a wedding. On the wedding day, the bridegroom went to the bride's house for the ceremony. Then, the bride and the groom, along with a great procession, returned to the groom's house where a festival and a great banquet took place, often lasting a full week.

These ten virgins were waiting to join the procession and they hoped to take part in the wedding banquet. But, when the groom didn't come at the expected time, five of them were out of oil for their lamps. By the time they had purchased extra oil, it was too late to join the festival and banquet.

When Jesus returns to take His children to Heaven, we must be ready. Spiritual preparedness cannot be bought or borrowed at the last minute.

The Bible teaches that every person is responsible for his or her own spiritual condition.

ARE YOU READY FOR THE RAPTURE?